The parent-child relationship is a continuous cycle of “love and acceptance.” Especially when there is a family member with a disability, parents and children must overcome unimaginable difficulties and challenges together, but they also grow and nourish each other in the process. 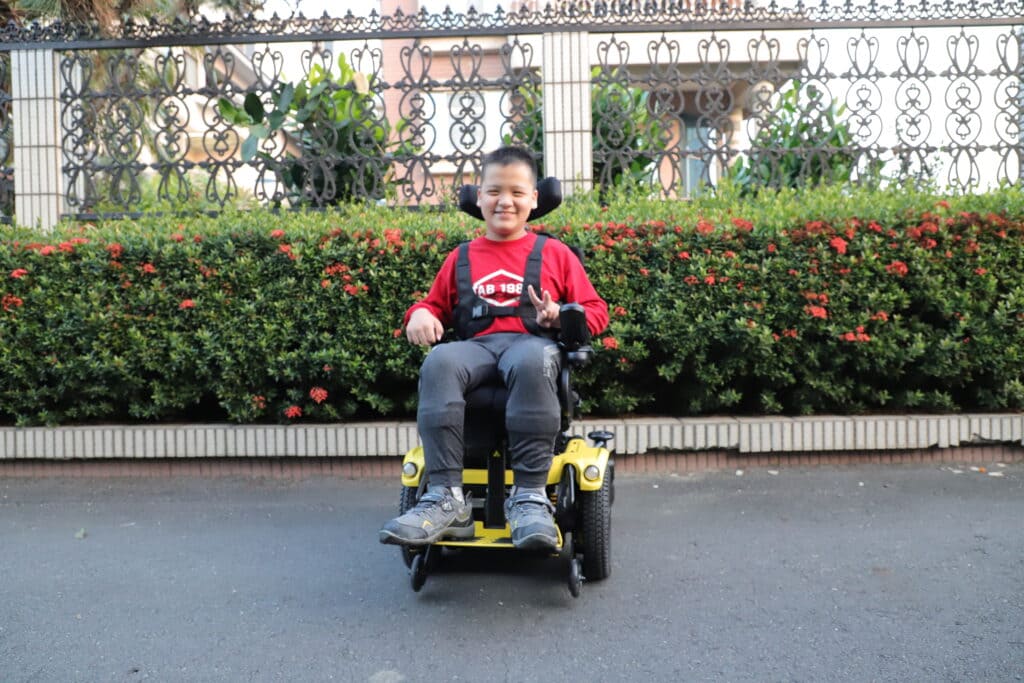 Leo is KARMA’s first pediatric power wheelchair, Kameleon, test driver. First, we would like to thank Leo’s mother for sharing her caregiving journey and her experience of the positive effects that a power wheelchair brought to her child’s life.

Leo has Cerebral Palsy (CP) as a result of premature birth. For this reason, his mother resigned from her job to accompany him to special education school. However, children attending special education schools have different learning abilities. Due to Leo’s limited mobility capability, he found it hard to make friends. He kept asking his mother, “Why can’t I go to an ordinary school?“ 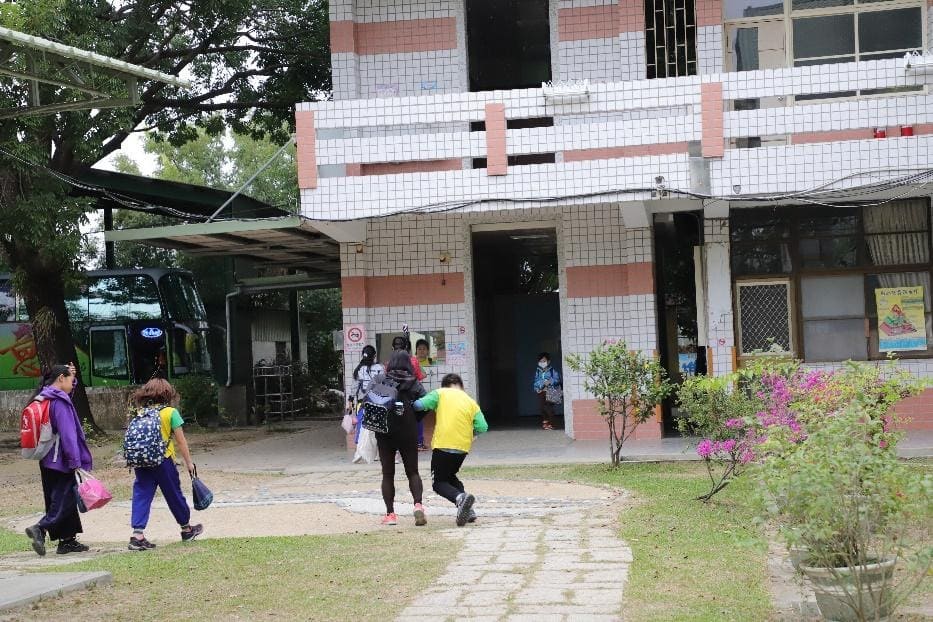 Leo’s mother dropping him off at school.

Two years later, his mom, determined to help him transfer school found it difficult to find a school to accept him. Either the school refused to accept him, or the teacher didn’t understand his own pace of learning so Leo was unable to keep up with the rest of his peers.

Leo was considered by some teachers as a child who could not walk, count, or write, but his mother refused to admit defeat. She started to teach him to pick up pens and draw lines, they practiced continuously every day. Now Leo is in sixth grade and can write and count. It is because he met a good teacher, even if he is a “slow” learner compared to others, the teacher never let him miss a class or gave him special treatment, which motivated Leo; “the teacher didn’t give up on me, so I can’t let her down.” 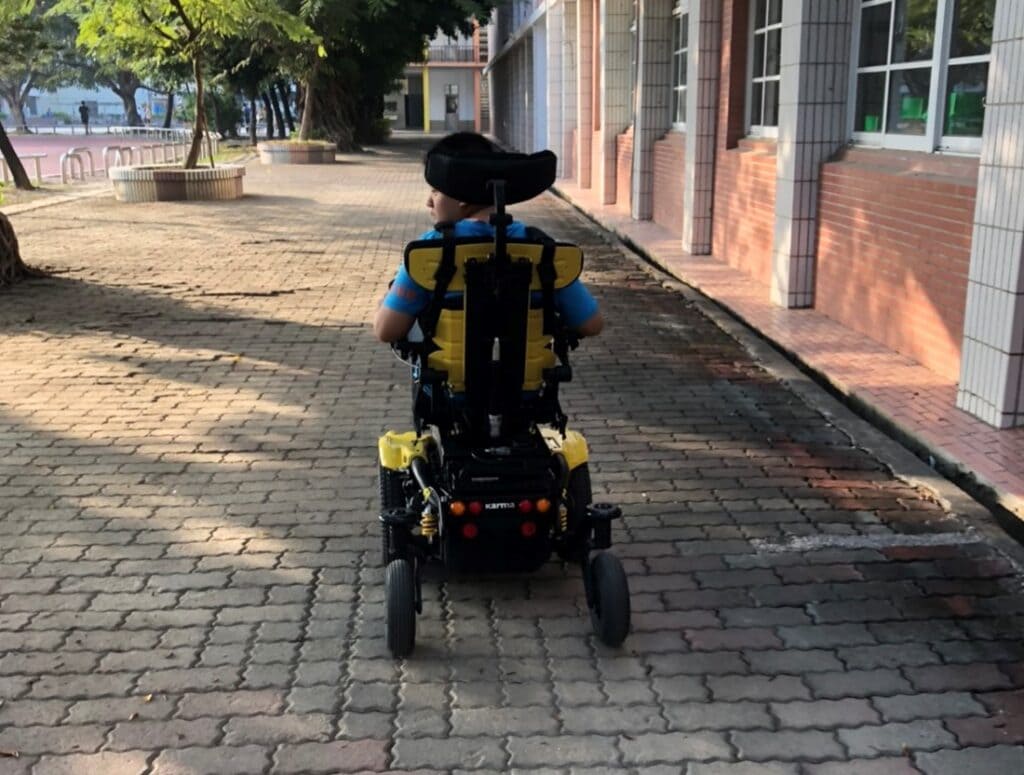 Leo getting to grips with Kameleon.

“You must accept yourself before expecting others to accept you.”

Most people might think that children with Cerebral Palsy to be very introverted, but Leo’s mothers never wanted him to feel different from others. If someone asks him why he wears steel shoes, his mother taught him to reply, “because I am a Transformer.” 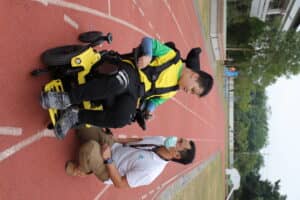 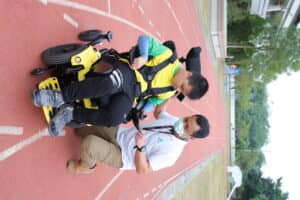 Karma’s OT. Joe Li, showing Leo how to use the power functions of Kameleon

“Instead of struggling to walk, it is better to keep your physical strength for learning.”

When he started the sixth grade, Leo’s parents decided to buy him a power wheelchair, hoping that Leo would start being more independent and not rely on his mother for everything. Although at first they were worried that he would rely too much on the power wheelchair and they would lose all the progress that they made with his walking. Later they found that as Leo grew bigger, his walking ability could no longer satisfy his curiosity to explore the outside world. It became more and more difficult to walk for long stretches of time, so his mother decided to reserve his physical strength for learning and experiencing new things.

In order to allow him to gradually become independent, Leo’s mother began to plan small outing goals. Before going out, they would set goals together, such as to buy the most delicious crepes ever! They would also practice outdoor safety rules, and simulate road conditions. 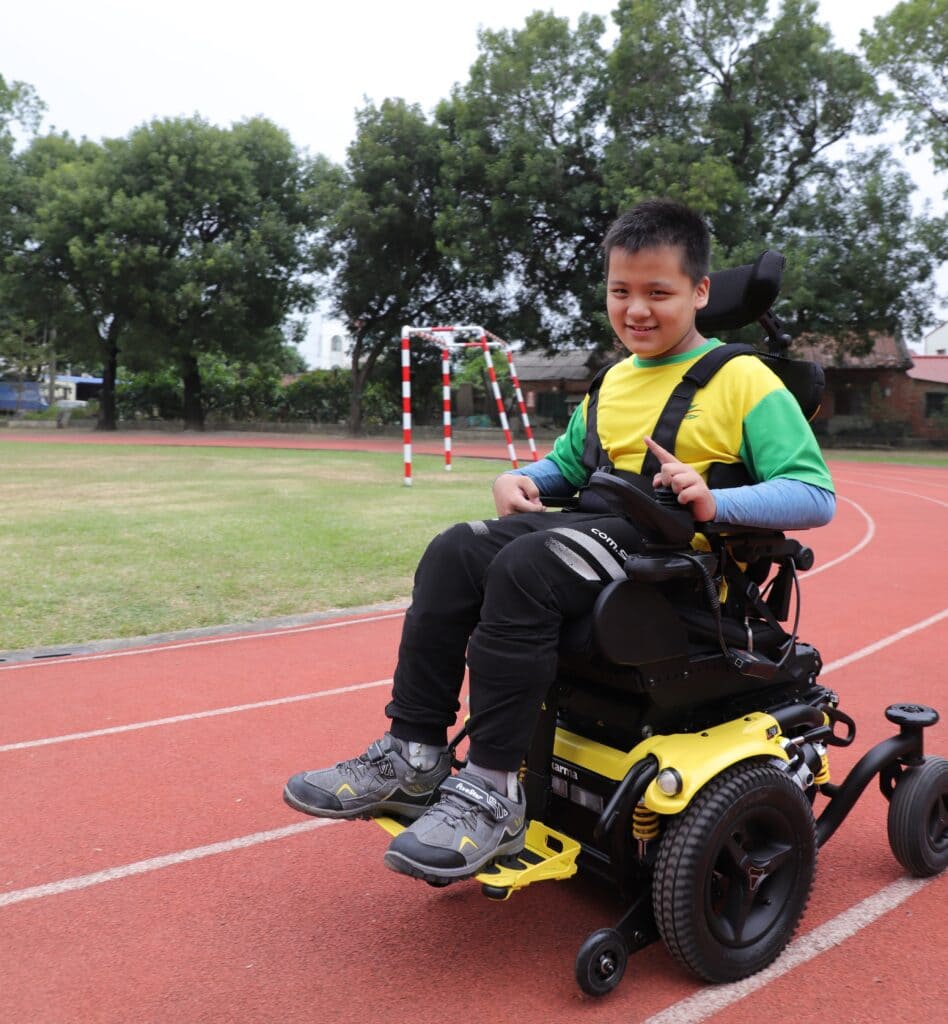 Leo can now participate in physical education with his classmates because of his new power wheelchair!

Leo’s mother, remembering her past few years with Leo said; “I used to be so busy and eager to do a lot of things, only thinking about reaching the destination. Later, because of Leo, I was forced to stop and take care of him, then I discovered that in fact, there are many beautiful moments in life that I didn’t really pay attention to. Although we had many difficulties to overcome, we also experienced and appreciate life differently to others.“

When assessing Leo’s condition, it was found that he had difficulty standing up due to weakness in his feet, and he was accustomed to pushing straight back when he was sitting down because his feet were weak. The seat surface was always half seated. The ability to lean on the back is relatively poor, causing the body to slip forward without support for long periods of time. In addition, his weak upper back caused non-fixed kyphosis, posterior pelvic tilt, and sacral sitting. If it does not improve, there is a great chance it will deteriorate into a fixed deformation in the future. Therefore, the focus of this assessment is to improve his seating position, making sure his back leans against the seatback and that he has proper positioning support.

Kameleon’s seat angle was adjusted according to Leo’s physical condition and sitting habits. Our therapist also taught him how to use tilt function to improve his sitting posture.

– Kameleon’s seat cushion foam is customisable. Through the adjustment of the front end angle of the seat cushion, it helps Leo to use gravity when sitting down so that his hips can be easily reset to the back of the chair and his sitting posture is more natural. In addition, the chair frame itself has a positioning function to prevent body deformation.

– The path to Leo’s home is relatively narrow and there are many turns, so the front-drive chassis of the Kameleon help him move around these small spaces.

– The lifting function has improved Leo’s confidence and independence.

– The Tilt-In-Space function has helped Leo to reduce the pressure on his hips that was causing his hunched back. The Tilt-In-Space helps him to reset his position and move his body back to the seat back let him sit more properly. 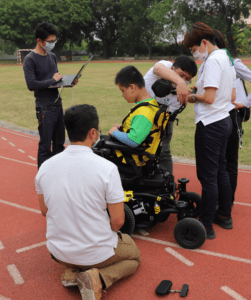 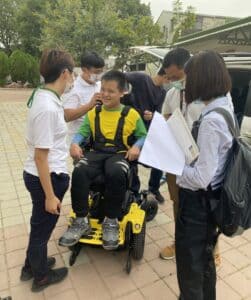 Leo loved seeing Kameleon the first time because it looked so good and exciting. Kameleon also feels lighter than the power wheelchair he was using in school.

Leo has a forward hunchback so the therapist adjusted Kameleon’s cushion to tilt it inward so that Leo’s buttocks will not slide down and he can sit naturally. With the covering and support of the backrest, headrest, chest strap, and pelvic belt, his body and neck can be straightened. Because the footplate is flat, it took a little bit of time to get used to getting on and off.

Leo likes going out very much. He usually goes out shopping with his mother. Now that he has a seat that can lift, it is very convenient for Leo to reach high places when he accompanies his mother to the store. The power storage and battery life of the Kameleon make Leo feel relaxed so he doesn’t worry about running out of power when he is out.

The speed is fast and the chassis is very stable, allowing Leo to enjoy the pleasure of racing around ( with the supervision of his mother of course). Leo also loves the bright colours of Kameleon… the neighbor’s grandmother even said that she wanted to buy one for herself!

After a week, Leo told his mom: “Kameleon can go up the mountains and down to the sea. No matter how uneven the road is, the drive is always so smooth!” 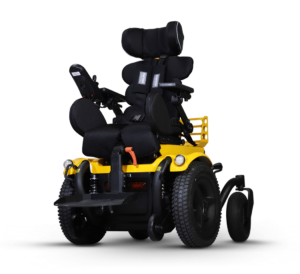